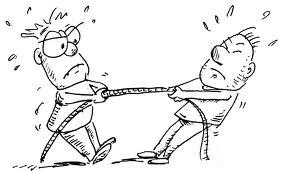 I’ve been starting to ride a horse for a woman. She is an adult amateur jumper rider with a big warm blood – easily over 17 hands. She describes him as very strong, almost like a freight train, particularly on his way to fences.

She had been trying a series of very strong bits, ones that dressage people usually roll their eyes and shake their heads about. None of them seemed to help much. I decided I just wanted to feel him in a regular snaffle to find out what I was dealing with.

He had had some decent training in Europe before she bought him, and in the walk and trot he was comfortable — round, fairly light, and willing to move off the leg easily.

In the canter he was more the way she had described. He would stay flexed but insisted on being unpleasantly heavy. At one point on a 20 meter circle I released both hands forward (uberstreichen), and he was shocked, throwing his head up in the air as if to say, “Oh my God! Where did the support I am used to go?”

So I spent the rest of the session weaning him away from his expectation of constant restraint. First little bits of small releases. Then gradually teaching him to canter long and low without getting strong. And finally bringing him back up and helping him find a balance to make canter to walk transitions without diving or falling on his face.

In my mind he has to learn this on the flat before I can hope to carry it over to the jumping ring. Logically, if you don’t give him a chance to fail (by releasing), he never has an opportunity to figure out what he is supposed to do with his freedom — freedom to carry himself, not grab ahold and run off) The corollary to all this is if you teach him an independent balance, he’ll be much more maneuverable and far easier to stop.