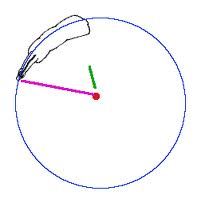 Sometimes what I see makes me crazy(er); so here are my own thoughts on the topic that I wish you would take into consideration when you lunge.It is said that whenever you work with your horse you are "training" him— sometimes for worse, sometimes for better but he will always draw some conclusion about what you have done. That said, from the moment you bring him out of his stall you should be "riding" him— directing him in a positive way to accede to your wishes. If you let him walk all over you in hand or pull his head down to grab at the grass when he feels like it, it will not bode well for work under saddle.

Briefly, regarding equipment: Obviously you need a lunge line, not a little short one that keeps your horse on a circle that’s so small he can’t move or that will damage his hocks, and preferably not one of nylon which can burn your fingers if he pulls through them suddenly. BTW, you should be wearing gloves too! You also need a lunge whip, not a little short dressage whip but a proper one with a long lash and definitely not thinking you can wave the end of the line around in your hand and get any useful effect.

A lungeing caveson would be nice, but not everyone has one these days. Don’t just clip the line to the inside ring of the bit. You can do it the Pony Club way – through the inner ring,up over the poll, and down to the ring on the outside. On horses that tend to be obstreperous, I prefer using a line with a chain, going through the inner ring and up over the nose, under the nose band, and fastened to the outside ring. This makes it easier to have your horse’s attention.

Lungeing should be reminiscent of riding your horse from the ground. That means he should be respectful of your driving aids and regulatable with your receiving ones. He must be ratable and guidable. In the most basic sense lungeing is a combination of leading and yielding. Before you begin on a big circle, you should be sure you can displace the horse’s body around his forehand (specifically his inside front leg) as though you are asking for steps of turn on the forehand from the ground. The whip should be applied slightly behind the girth area to get a step over, followed by a half half on the line to catch and balance him, followed by softening/releasing of the contact. The whip must help him learn to move over. The horse must trust it, not want to run away from it. It is to direct him, not terrorize him!

As he understands, lead him around you with an opening rein (line) While ushering him forward with the whip held low and pointed at his flank. Your goal is to maintain contact on the line as though you were riding, your whip preventing him from falling on his inner shoulder while at the same time having him follow your hand and not bulging out or dragging you off the circle.

The USDF Instructors Manual goes into all of this at great length. Some of it is pedantic to the point of silliness – a function of the individual author’s personality. I honestly don’t care if you stick your leading heel into the ground and pivot around it, but the point is you should be aware of maintaining a round circle and not letting the horse dictate the size and shape of where he is going. I also don’t care if you fold the excess line back-and-forth across your palm in the British Horse Society prescribed manner, but if you don’t, you better be darn sure the loop doesn’t wrap around your hand and damage your fingers if the horse acts up!

In the beginning the circle can be fairly small so you can reach the horse with the end of the lash, but as he comes to understand its message, the circle should get considerably bigger – 20 meters or more.

In general the whip should be pointed fairly low and not be waved around in the air. It should rarely be cracked, especially if there are other riders in the arena.

When making a downward transition on the lunge, the horse should continue to face around the circumference of the circle, not turn and look at you. Likewise, although it may be cute to have him turn around on his own when you wish to reverse direction, that seems contrary to the overall point you’re trying to make as you work your horse.

As for what you do with your horse on the lunge, when you start him, don’t allow him to go bursting off in whatever gait he likes. Ideally, start in the walk and then trot on your terms. If your horse is fractious or over energized as they sometimes can be on a cold day, don’t let him zoom around in a fast trot. I want him to learn that his trot must be rhythmical and of a tempo that promotes elasticity and the use of his back. If he just can’t help himself, I’d rather have him play in the canter and get his bounces out so he can settle into a working trot.

As for side reins or running reins, it’s fine to use them, but I find it depressing when someone fastens them to the bit while the horse is still in the stall and he never has a chance to work loose and free in his first warm-up.

Treat this as a thumbnail of first things to think of when you lunge. There are plenty of other details which I could add, but go from here.