Use the "As If" Principle to Improve Your Riding (Current Freebie!) 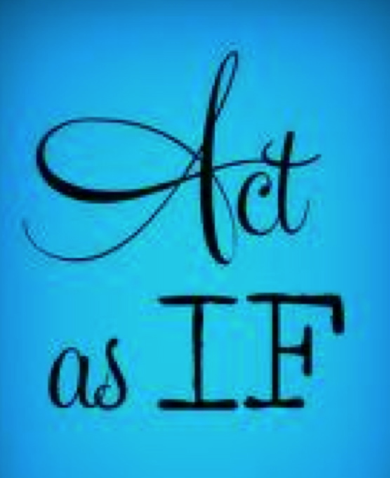 Your mind is a powerful tool! Did you know that acting as if we already have a particular quality will help us to produce it? While not always true of course (after all, I have been "acting" as if I am a multi millionaire lately... and that does not seem to be coming true...), it has been scientifically proven to be true in many circumstances!

This is from the book, "The As If Principle" by Dr. Richard Wiseman:

“Common sense suggests that the chain of causation is:
You feel happy — You smile
You feel afraid — You run away

The As If theory suggests that the opposite is also true:
You smile — You feel happy
You run away — You feel afraid”

He goes on to show multiple scientific examples of how acting "as if" we feel an emotion actually produces physiological changes in our bodies. It's about using positive action, rather than simply positive thinking. Here are a few cool examples:

"Dana Carney, an assistant professor at Columbia Business School, led a study where she split volunteers into two groups. The people in one group were placed into power poses. Some were seated at desks, asked to put their feet up on the table, look up, and interlock their hands behind the back of their heads. In contrast, those in the other group were asked to adopt poses that weren't associated with dominance. Some of these participants were asked to place their feet on the floor, with hands in their laps and look at the ground. Just one minute of dominant posing provided a real boost in confidence.

The researches then turned their attention to the chemicals coursing through the volunteers' veins. Those power posing had significantly higher levels of testosterone, proving that the poses had changed the chemical make-up of their bodies."

"In 1979 Harvard psychology professor Ellen Langer  recruited a group of men in their 70s for a "week of reminiscence" at a retreat outside Boston. Before the study started, Langer tested the men's strength, posture, eyesight and memory.

She then encouraged the men to act as if they were 20 years younger. When they arrived at the retreat, for instance, there was no one there to help them off the bus and they had to carry their suitcases inside. In addition, the retreat had not been not equipped with the type of rails and other movement aids they had at home. After unpacking, everyone was assembled in the main room of the retreat. Surrounded by various objects from the 50s, including a black-and-white television and a vintage radio, Langer informed the participants that for the next few days all of their conversations about the past had to be in the present tense, and that no conversation must mention anything that happened after 1959.

Within days, Langer could see the dramatic effect of behaving As If. The participants were now walking faster and were more confident. Within a week several of the participants had decided that they could now manage without their walking sticks. Langer took various psychological and physiological measurements throughout the experiment and discovered that the group now showed improvements in dexterity, speed of movement, memory, blood pressure, eyesight and hearing. Acting as if they were young men had knocked years off their bodies and minds."

Now... how to apply this concept to our riding! Let me share a personal story, of an example of how this principle worked for me at one point in my life:

When I was young and learning how to sit my bouncy horse's trot, nothing that anyone said to me was helping. My instructors would describe how to sit the trot, I would read books on the subject, and try all of the different things suggested. And I was still bouncing. What eventually ended up working for me was to watch a really good rider who was sitting a very bouncy horse's trot well. And then I didn't overanalyze it... I just got on and pretended I was that rider. And it worked! I wasn't immediately perfect of course, but that was the beginning of me finding the feeling of how I needed to move to "ride the wave" of the motion in the sitting trot.

Another big way to use this useful principle is regarding your level of confidence. As you ride to the start box or in gate, you may be so nervous and apprehensive about the course that you are about to jump that you can hardly feel your fingers and toes. So worried about whether or not you have the ability to the course in front of you, that you become rigid and less effective as a rider. So stressed out that you can't even begin to remember the course!

If this sounds like something you have a problem with, give this a try the next time you are in this situation... As you are riding around in the warm up, look around and find someone who looks very calm, poised, and confident. It may be a trainer, or maybe a particularly calm and self assured fellow amateur rider. Once you find someone, watch them ride for a few minutes. Note every detail that you can that pertains to their relaxed confidence. Note how quietly focused they seem, how soft and following they are in their arms, and how they sink down into their relaxed ankles with every canter stride. Then take a deep breath, smile, and pretend that you ARE that rider as you complete your warm up and head to the start box. You might be pleasantly surprised to find that, although you are not perfect, you feel more relaxed, fluid, and confident in your warm up than you usually do. And you can make that carry over into your performance on course as well.

You can use this concept to increase your scores in the Dressage ring as well! As you come down the center line in the Dressage ring, put all your insecurities in the back of your mind, and pretend that you are William Fox Pitt or Mary King... on one of their fabulous horses no less! Smile, look the judge right in the eye, and ride your test with the attitude of "We are awesome! Watch this!" Your attitude will show through to the judge... and your horse will feel your confidence too!

The "as if" principle is not magical, but it is still pretty incredible. And it is something that just about everyone (with an imagination!) can use, and get benefits from, to at least some degree. Please report back with your results from your attempts to use this concept. And I will keep you posted on mine as well. You know... about my multi millionaire status... ;)